The South Philippine Dwarf Kingfisher, or Ceyx mindanesis, was described to be the tiniest species of forest kingfishers in 1890 during the Steere Expedition.

As its name suggests, it is found in Mindanao and Basilan–found in the southern islands of the Philippines.

It makes a “high-pitched, insect-like, and almost inaudible zeeep,” but scientists have very rarely seen the creature as it perches very quietly on trees and because its beautiful colors help the bird hide from ‘suspecting’ human eyes.

In a recent walk by a team from the Robert S. Kennedy Philippine Bird Conservancy, South Philippine Dwarf Kingfisher was spotted, and photographs were taken, for the first time.

The team led by the conservancy’s director, Miguel David de Leon, have been attempting to study and document the nesting, feeding, and breeding behaviors of the rare bird for ten years now. And the photos they have taken are proof of their success.

“The Robert S. Kennedy Bird Conservancy is a group of eight field workers and bird photographers that documents birds and habitats, contributing data previously unknown to science, with the ultimate goal of conserving species and ecosystems,” says De Leon in an interview. “We focus on poorly known birds and document their biology and ecology or how they interact with other organisms in their habitat.”

Wild Birds in the Philippines

Although this is a first for the South Philippine Dwarf Kingfisher, there are a number of other birds that interest a lot of people. In fact, there is a group on Facebook that showcases photographs of wild birds in the Philippines and anyone is free to join this group. 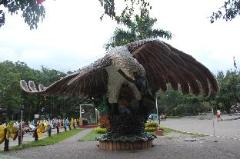